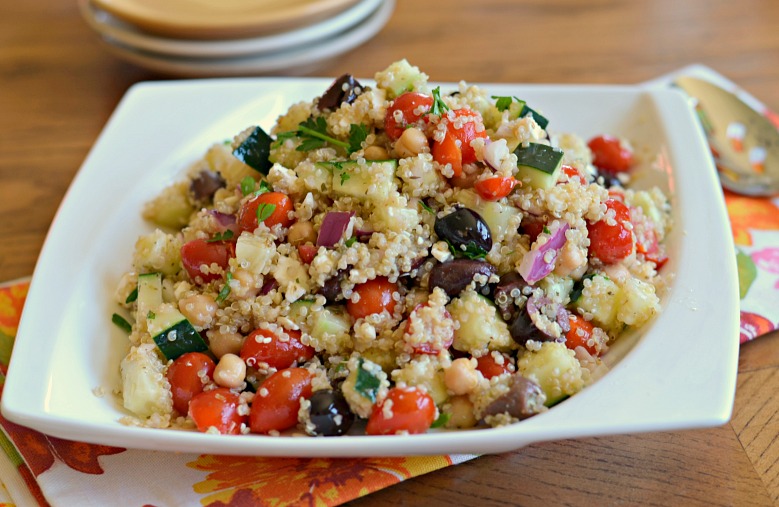 Yummy alert! This simple Greek Quinoa Chop Salad is a meal. Sure you can serve it as a side dish which I did a few days ago at Sherie and Michael’s BBQ. But in reality, this salad can hold its own as a main dish. How’s that you ask? Where’s the meat? Well, here’s the deal…you don’t always need to have meat in every meat to get enough protein.

Didn’t you know that other foods like beans, nuts, vegetables and many whole grains contain protein too?  In fact, quinoa is one of the few grains that contains a good source of complete protein. So much protein in fact, that vegans use this whole grain as a staple in their diet.

And there are so so so many health benefits to eating less meat.  Especially because most of us eat way too much of it anyway. A 2014 study found that people ages 50 -65 who ate lots of meat protein (as 20% or more of their daily calorie intake) – suffered a 75% jump in mortality risk and were four times more likely to develop cancer than those who restricted protein to 10% of their calories.¹

That puts heavy meat consumption on par with smoking when it comes to health.

Makes you kinda think, huh? Especially when all your friends are saying go paleo. Um, maybe not.

So I’ll end my scientific rambling now and just say… try this salad. If for no other reason than it’s just so darn good.

And if you haven’t tried quinoa (pronounced “keen- wa”) now is the time. It’s got a subtle nutty flavor and adds that “chew” factor that makes a salad more like a meal. Plus, I am in love with anything that includes Greek flavors.

Somehow those flavors just explode in my mouth. Are you with me? I think I should have been born in Greece. I just love Mediterranean cuisine.

But first, lets go get us some Greek Quinoa Chop Salad…. Heidi